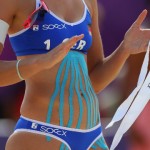 Beach volleyball players, particularly Olympians, are known all around the world for their incredible skill with the ball. They’ve also been known for wearing those skimpy uniforms.
Now, something that’s covering their skin is getting a lot of attention.
It’s called kinesio tape. The tape has been around for decades, but during the London 2012 Olympics, it has been spotted stretching and spiraling in interesting patterns on some athletes.
U.S. silver medalist Trey Hardee had big black pieces snaking up his legs in the decathlon. German beach volleyball star Katrin Holtwick wore bright blue bits of it running up and down her six-pack abs. Even ping-pong players were reportedly wearing it.
With its Olympic popularity, athletic trainers say you can bet you will see a lot more of the tape at your local gym or on the playing field this year.
Paul Ullucci Jr., a Rhode Island athletic trainer who is on the board of the National Athletic Trainers Association, says he received a call Friday from a patient about the tape.
“She said she had been watching the Olympics, saw the tape on sale, and wondered if she should buy it,” he says. “I definitely think I’ll be getting a lot more of these calls for the next month or two.”
The highs and lows of the 2012 Olympic ‘crying games’
Ullucci says he keeps the tape as a tool to help improve balance in athletes, and says it helps prevent excessive protraction injuries — in layman’s terms, shoulder problems from activities including playing tennis.
If you put the soft and stretchy cotton tape in the right area, Ullucci says, it will pull at your skin when you start to overextend your arm, reminding you not to.
Because the tape is thin and pliable, it’s different from athletic tape used on ankles or wrists, he says. That kind of tape keeps the injured joint from bending to prevent further injury.
Japanese chiropractor and acupuncturist Kenzo Kase designed thetaping method in 1979, according to his company, Kinesio. He thought the standard taping methods of the time were too restrictive and may even extend injuries, because they inhibited the flow of inflammatory fluids beneath the skin.
A flexible tape that could be applied to injured muscles, he believed, would stimulate circulation through its tug on skin and start clearing out the damage.
According to Adam Halpern, education director for Kinesio, Kase’s patients kept telling him they felt great in his office, but the impact of his healing hands would diminish after a while. The tape he developed stretched the good feeling.
“I was just at the Olympic beach volleyball game between Russia and China with him, and both of the teams were covered in it,” Halpern said.
“You should have seen the doctor’s smile. To think he just had an idea and created a product that serves practitioners and is used at the highest level of athletic competition in the world, well, you know why he was smiling.”
The company has trained more than 100,000 practitioners around the world on how to use the tape, Halpern says. It has been used by 80 countries at the London Games, he says.
It also has been spotted at the usually staid Wimbledon and on athletes including soccer’s David Beckham and cycling’s Lance Armstrong.
“A lot of athletes like it because there are no chemicals and it is a natural healing mechanism that tells different receptors to deactivate a little bit if the muscle gets too tight,” Halpern says.
Some, however, are skeptical about the tape’s effects. There aren’t many large scientific studies regarding its effectiveness, says Dr. Nicholas Fletcher, an assistant professor of orthopedic surgery at Emory University.
“I think, if anything, there is a placebo effect involved, and there probably is a little bit of a peer pressure effect. When people see athletes who are doing so well, they think, ‘Maybe this could work for me,’” he says.
Why do Olympians bite their medals?
He compared the tape to knee braces for athletes. “There is little data to support knee braces’ effectiveness in a lot of situations, but when I talk to my patients, they say they don’t want to run without it,” he says.
Robin Rogers, an Atlanta runner who is also a massage therapist for athletes, says he’s a fan of the tape.
“It definitely feels like it is doing something, and helped me feel better in training,” Rogers says.
He has used it for his own plantar fasciitis. With his clients, he uses it for shin splints and he has taped up some hamstrings.
Rogers says he hasn’t used the tape in any races yet. “But hey, I’m a runner — we’ll try anything that will give us that edge.”
Running coach and marathoner Tina Klein says she tried the tape, but it didn’t work for her.
“I have hamstring issues and I kept trying it, but the stuff just wouldn’t stick to me,” she says. “Ultimately, I decided to go the regular therapy route instead, but I know some people swear by the stuff.”
Still, says Fletcher, “If it gives you a sense of stability and support, or gives you that psychological edge, why not? It’s not going to harm them. It’s pretty-colored cotton tape.”